Enter your City name or Pincode

Founded by the great Bundela Rajput Ruler - Maharaja Chhatrasal, Chhatarpur is counted among the top tourist destinations in Madhya Pradesh. It has the sightseeing places that belong to great cultural heritage and historical legacy, which allure visitors from far and wide. Moreover, Chhatarpur city is nestled on wonderful location as you can easily embark on to the historical temples of Khajuraho. All aspects of life are majestically captured in these stone sculptures of Khajuraho. Apart from this archeological and architectural opulence, the beautiful place of Chhatarpur also boasts of magnificent natural locations, which are also explored by worldwide travel vacationers. So, go through here to know about the worth-to-be-visited tourist attractions of Chhatarpur, Madhya Pradesh. 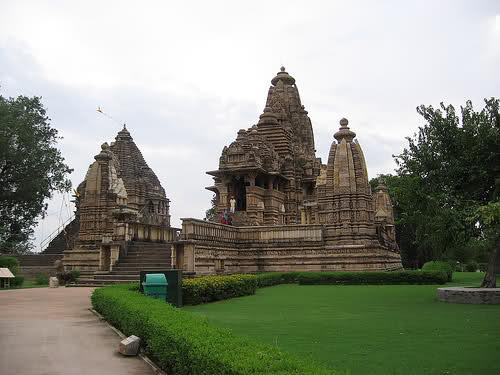 Best Time to Visit at Chhatarpur

If you are planning to enjoy your holidays at Chhatarpur, then you should think about the perfect time to visit here. In the city, the summer season is too hot to confront when the temperature rises up to 45 °C. So, the months from March to June would not be suitable for you to travel around its exotic destinations. On the other hand, the monsoon months of July - September can also spoil your holiday aspirations because there is too much precipitation at the city. Therefore, the best time to embark on to Chhatarpur is the winter season during the months from November to March. It is an ideal time to have sightseeing of the major tourist attractions of the city under bright sun shine with cool air.

The city of Chhatarpur provides great scope of excursion as it has been embellished with several historical, cultural and architectural attractions. Some of the most visited tourist attractions of Chhatarpur are mentioned below. 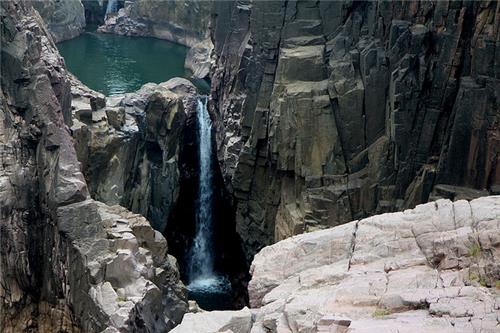 Raneh Falls, which is a natural waterfall on the Ken River, is another astonishing tourist destination where the large numbers of visitors can be witnessed. It is entirely a five kilometers long and 30 meters deep gorge that is imprinted through many Ken River’s sparkling granite in different shades of colors like red, grey and pink. At here, you can enjoy a sequence of waterfalls in the canyon in which the larger and smaller falls flow throughout the year while other waterfalls usually run on the monsoon. The nearby places of this great picnic spot of Raneh Falls are Khajuraho, Pandav Falls and Ken Gharial Sanctuary.

Located on the offshoot of the Ken River, Pandav Falls is renowned among the main travel destinations of Chhatarpur city in Madhya Pradesh. It is a very attractive waterfall that also has some history behind it. According to few folk tales, the five Pandava brothers, Yudhistra, Bhima, Arjuna, Nukul and Sehdeva, once camped here for about one and a half months in the last year of their exile. Pandava Falls are bounded by lush green surroundings and considered as an abode of bears and wild cats. There is also a small cave near this tourist spot in which five sculptures of Pandava brothers are located. It will be a pristine hangout for the families who like to have their holidays at serene environment.

If you are spending holidays at Chhatarpur, then Gulganj Fort should be in your visiting list. This historical monument was established in the 18th century and it is based on Bundeli style. Gulganj Fort is a two-storied monument and has two portions within its interior. For entering inside the fort, one has to go through a flight of steps, which also have a step well. There are citadels at this fort, which were utilized for defense purposes. Gulganj Fort was of special strategic significance for the rulers of those days. Thus, visiting at this astonishing tourist place will definitely a nice option for you. 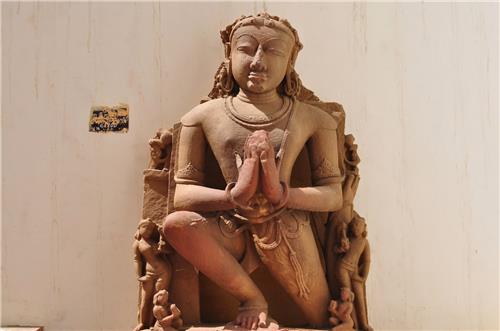 Maharaja Chhatrasal Museum, an old palace at Dhubela region of Chhatarpur, on the Chhatarpur-Nowgaon highway, Madhya Pradesh. This museum was established in the year 1955. The travel vacationers, who come to see this museum, enjoy here its eight galleries in which two galleries showcase writings, Sati pillars, copper plates and lingas. They also have carved images of Gupta and Kalachuri era. Besides that, Maharaja Chhatrasal Museum also embraces statues of the Shakti cult, wonderful collection of Jain images and the clothes, armaments and beautiful portraits of the Bundela rulers.

Adinath Temple constitutes a vital part of the Khajuraho’s Eastern Group of Temples. This divine place is easily accessible from Chhatarpur city. It is a long standing Jain Temple, which remains open throughout the week. The temple is designed in shells that showcase the glory of its past through beautiful sculpted figures, carvings and statues. Adinath temple is dedicated to the Jain Saint, Adinath. For over the years, the entrance of this temple can only be renovated, which is adorned with using well-modernized lime-plastered stonework with curved doorways. The temple is located exactly to the north of the Parsvanath and it carries figures of Apsaras, Shashan Devis, Yakshines and Vidyadevis.

Matangesvara Temple forms an important part of Khajuraho’s Western Group of Temples. It is still an active worship place where lots of devotees come to perform their divine practices. The temple is a majestic embellishment of the Brahma Temple as it has the compositional provisions of the mandapa roofs of the Khajuraho temples. It is the only temple that has 7 feet high shivling and regarded as one of the oldest temples of Khajuraho. The pillars of this temple are plain and the maximum of them display fundamental adornments of edges and floral edges. Matangesvara Temple is located just next to the Lakshmana Temple.

Hanuman Tauria is also one of the most visited tourist spots in Chhatarpur city of Madhya Pradesh. It is nicely situated on the long hill, which is placed at the center of the city. There is a lake in front of this divine place, which is known as Kishore Sagar Talab. A number of devotees from and outside the city come to this temple, especially on Tuesdays and Saturdays to seek blessings from Hindu deities including Hanuman, Shiva and Sita-Rama. One can reach at Hanuman Tauria by road as it is just one kilometer away from the Chhatarpur bus stand, which has road links from the nearby cities of Chhatarpur. 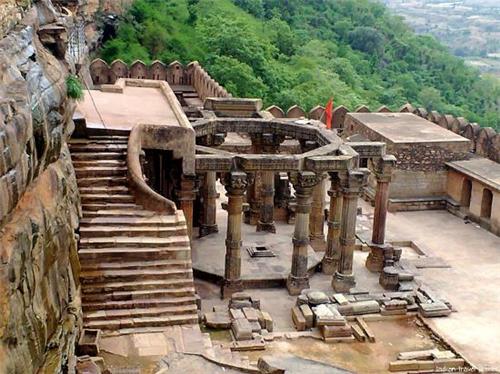 Kalinjar Fort
Kalinjar Fort in Banda District of Uttar Pradesh near Khajuraho is strategically located and is
embellished with several temples and structures, which constitute a major part in Khajuraho’s historical heritage. This fort is also referred to as the ‘Indian hill-shrines’. It was established with Hindu flair of architecture and represented the mark of artistry, elegance and dignity. Kalinjar Fort is perfectly situated on the top of the holy hill, which was majorly used for defending the empire from external threats. Besides that, the fort is surrounded by serene atmosphere which is a perfect place for meditation. Visiting here would be a special experience for you while traveling Chhatarpur city of Madhya Pradesh.

Ken Gharial Sanctuary is also counted among the foremost tourist attractions of Chhatarpur. It is a very popular abode of gharials where their breeding programmes are frequently conducted. The sanctuary was founded on two famous rivers, which are Khudar and Ken. Its beautiful surroundings and serene atmosphere attract large numbers of visitors from around the world. Not just the holiday seekers, this place is also very favorable for animal enthusiasts. Other than gharials, tourists at Ken Gharial Sanctuary can also enjoy the presence of animal species like wild boar, peacock, nilgai, chinkara, and cheetah.

Bambar Baini is a splendid and ancient divine place, which is dedicated to Maa Durga who is the symbol of Shakti or power. The temple is situated on a hill in Laundi, Chhatarpur, Madhya Pradesh. It draws the devotion of lots of visitors who reach here after climbing 450 steps to the top of the hill. The establishment of the temple is assumed to be in between the 17th - 18th century. There is a holy pond in front of the temple, which adds more charm into its natural beauty. You can easily arrive at this important pilgrimage site from the nearby places like Harpalpur, Mahoba and Khajuraho.


Where to Stay at Chhatarpur ?

In order to explore these astonishing tourist places in Chhatarpur, you don’t need to worry about your accommodation. There are plenty of staying options available in this place in which you can choose according to your budget and convenience. The hotels in Chhatarpur offer a home staying experience to you by presenting lots of contemporary features within their elegant rooms. Besides the accommodation, the dining and conferencing services are also provided to the guests. Below are the names of the best hotels in the city:


Where to Shop in Chhatarpur ?

As a travel vacationer, you can also add more flavor into your holiday celebrations at Chhatarpur by enjoying shopping here. There are exclusive shopping destinations in the city where buying something would be a nice experience for you. Some of these can be Anurag City Center, New Alankar Jewelers and Arihant Provision Store. From apparels to computer items or from jewelry to automobiles, you can buy anything as per your likings. Another interesting thing about these shopping places is that they are locating in the proximity of these sightseeing destinations. Thus, you don’t have to travel a long distance to enjoy shopping at Chhatarpur.


How to Reach Chhatarpur ? 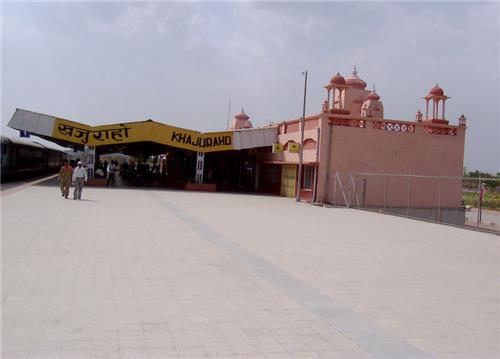 The city of Chhatarpur is well-connected to the major cities of Madhya Pradesh via road. You can easily drive towards this city from the places like Bhopal, Jhansi, Vidisha and Mahoba. There are frequent state transportation bus services running from this city while some private bus operators are also providing their services. If you would like to come at Chhatarpur through train, then you have to arrive at Khajuraho Railway Station, which is the nearest railway station to this historical place. This railway station has the routes from the important cities of the state. The nearby destination of Khajuraho also has the airport, which is the adjacent to Chhatarpur.